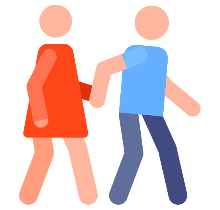 Codependency is a dysfunctional relationship in which a person is more concerned about the needs of others than his or her own needs. This catalog will focus on creating an understanding of codependency, the warning signs one is in a codependent relationship and how codependency and addiction can be intertwined.

What is Codependency? Are We ALL Codependent Sometimes?

From the article by Harley Therapy:

"But how many of us know what the term really means? What is the real definition of codependency? Well the truth is, its meaning has actually changed. The original use of the word codependency rose out of Alcoholics Anonymous as a way to describe the partners of alcohol abusers. It was noticed that the partners themselves, despite not having a drinking problem, were in a way ‘hooked’ too, in that they were ‘addicted to the addict’. They often had a pattern of being involved with alcoholics, and/or grew up with a parent who was an addict of some sort, whether that was drink, drugs, gambling or a sexual addiction."

Login to the Laura Project and get special insight as a site member.

Enter the email address that you signed up with and we will email you a password reset link.

Your account is protected with two-factor authentication. We've sent you an email with a code to enter below. Be sure to check spam filters if you have not received the email.

Your session is about to expire.